It was two o’clock in the afternoon when we walked into the dimly lit restaurant munching on locally made jerky. Pink disco laser lights raced across the dark walls covered with stoner paintings. The scent of kombucha and patchouli overpowered the scent of freshly made food. The constant beat of techno music overpowered the various meat-free conversations and the awkward chef wandering around asking all the mid-twenties women if they wanted jobs. I was here to interview Rachel and Leah, here was a hippy vegan cafe in the mountains. The beef jerky we nonchalantly brought in sat awkwardly on our table top. I felt like it was staring at us and so was our server.

It’s probably due to the hilarious outfits after a day of skiing (Rachel has an amazing purple one piece ski suit that looks like a 1990s-highlighter-colored-macaron, so we dressed the part too). 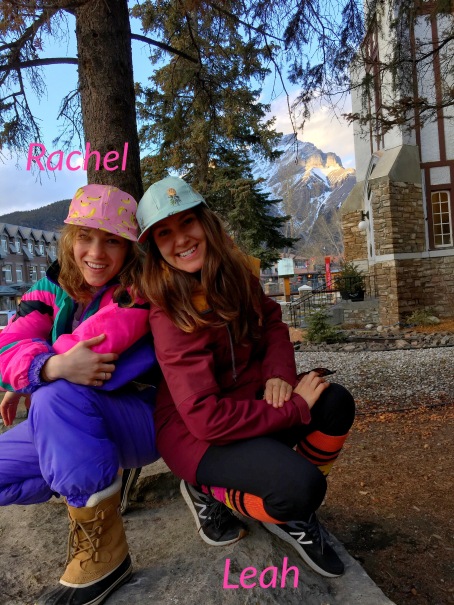 Leah is currently the CEO of three companies, she’s an entrepreneur who somehow balances her work, personal life, and active lifestyle while living bicoastal between Silicon Valley, Halifax, and Boston. Rachel is a rising journalist and adventurer on the road to becoming a leading foreign correspondent in conflict reporting.

This story actually started when Rachel spontaneously hitchhiked across the country with nothing but a backpack and unbridled determination. The two athletic world-travelers first met in Quebec while studying French, and a month later Rachel pitched her tent in Leah’s backyard in Halifax before settling into the East coast lifestyle.

Rachel’s badassery makes her a journalist to keep an eye on. She’s a young female version of Anderson Cooper with really hectic hair.

Leah, what does nutritious mean to you?
When I think of nutritious I primarily think of food that is good for your body. Food is nurturing for the body so if it’s nutritious it should have vitamins, minerals and all the things your body needs and give you energy.

Rachel?
I think nutritious also means having a balance. Food needs to provide you with energy to do the things you want to do. Nutritious foods are the foods that allow you to feel and do your best.

Leah and Rachel are two of the most competitive women (aside from myself) that I know. We decided it was necessary that they have a competition style interview while they were visiting for a ski trip. I asked them questions and they had to answer what they thought the other person would answer.

If you could cook a meal with anyone in the world who would it be?

What four foods would she bring to an island you’re going to be stuck on for months?

For the record, Leah said she’d actually bring seeds to grow her own food.

The proof that Rachel would only bring Sriracha. 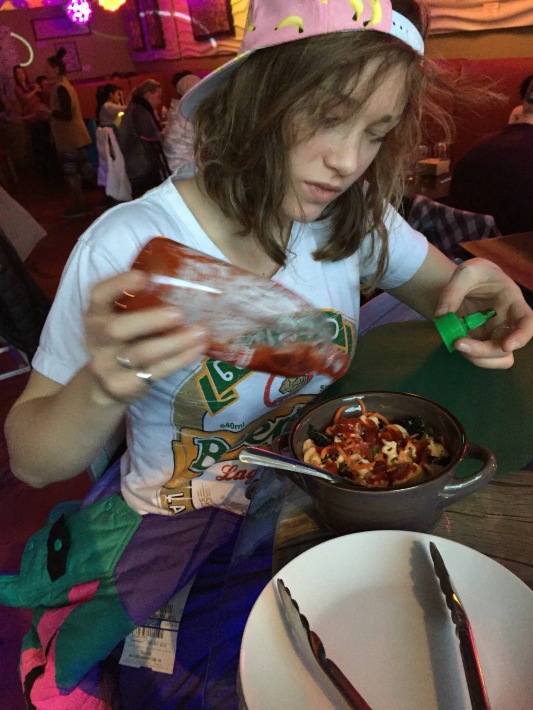 What would she tell the general public about healthy eating?

What is your favorite thing to cook?

Does she know what TVP is?

Leah did know the answer.

What do you think the barriers to healthy eating are?
Leah: People get in the way of their own healthy lifestyle goals when they choose convenience over their health.

Rachel: I can think of two things: education and accessibility. I think everyone you’ve interviewed has probably said education so I’ll talk about accessibility. People with a lower socioeconomic status don’t have enough money and skills to buy and prepare healthy foods. If you need food on the go it’s cheaper to buy a greasy ass burger than a kale salad with quinoa.

Leah: I tried to live on $4.00 per day on food for a month. I tried to eat healthy foods and buy the most inexpensive items and I ran out of money in the second week. I bought in bulk and spent wisely and still couldn’t do it. After I ran out of money I ate A LOT of noodles because I was dedicated to the month-long test. with it just to see what it was like to struggle like many people do. I was sick of noodles after two weeks.

If you want to hear more from Leah watch her TEDx talk. Look for Rachel on the nightly news for her worldly feedback.